by ABD Engineering and Design | Audiovisual 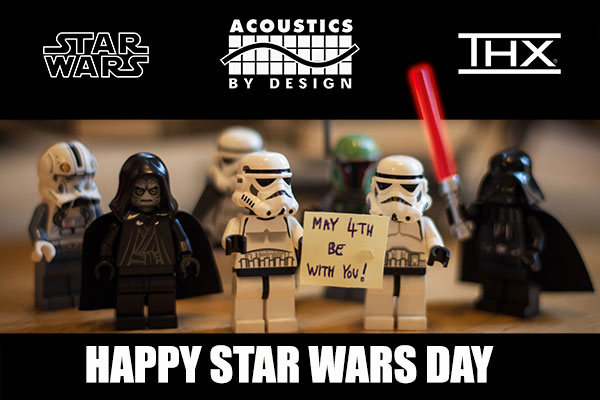 The Star Wars Episode VII cast was announced this week, and Star Wars Day is this Sunday! May The 4th Be With You! So, what better way to celebrate, than with this post about THX?

THX is an audio-visual and acoustical standard developed in 1983 by Tomlinson Holman, an audio engineer at Lucasfilm. The standard was developed for the third Star Wars film, (episode VI) Return of the Jedi, to ensure the soundtrack would be reproduced as accurately as possible. It was named after Holman and the “X” added to represent the special “crossover” circuit, as well as a tip of the hat to George Lucas’ first movie, THX 1138. It’s nice when things work out like that isn’t it?

THX is used in movie theaters, as you can imagine, since that’s what it’s designed for. It’s also used in home theaters, and lately (since THX was acquired by Creative Labs) in some motor vehicles with video playback capability. I mean, you don’t want to cruise down the highways and byways of this great land without the accurate theatrical experience in the family truckster now do you? Of course not. That accuracy comes with certified equipment, but that’s not all.

THX certification can be attained by audio-video components, and by installers of those components. Even with that, you might not have a THX-certified room. The room acoustics include what you’d expect: a floating floor, non-parallel baffled and acoustically treated walls, a perforated screen to allow for the center-channel sound to come right through the screen, and an NC30 rating (Noise Criteria rating of 30 is common for a variety venues where speech intelligibility is important) for the mechanical systems. With all of that worked into the standard, is THX really all that it’s cracked up to be?

THX is good, because you know what to expect. If you’re mixing the soundtrack for a film, you know that if you’re using the THX standard, the THX-certified theater will be able to produce the sounds correctly. You know how much of each frequency to mix in. You know, for example, just how much bass to use for the rocket launch! You can count on a finished product sounding the way you want it to, even though it will be heard in a venue where you’ve never been. It’s a standard, and that’s what standards are for. With THX, you know what you’re getting.

Acoustics By Design maintains our unbiased approach by keeping away from particular manufacturers or products, to be sure we’re always offering you the best solutions, rather than any particular product. That doesn’t mean we shy-away from certifications like THX. We can, and have, designed acoustical and audio systems for IMAX and THX, including the largest multi-screen complex in the world (at the time).

When you hire ABD for your acoustics, and audio-video and lighting design, you can be confident that we will listen to your needs and provide consulting that is independent of any specific manufacturer. At the same time, if you’re trying to meet a particular standard, you can be sure we can provide the design to match.

ABD Engineering and Design is one of North America’s leading independent acoustical consulting and AV design firms, serving clients across the United States and Canada, as well as other international markets from offices in Grand Rapids, MI and Portland, OR. Our specialized acoustical engineering and AV design practices help architects, building owners, engineers, facility directors, and municipalities design spaces, environments, and systems for optimal acoustical and audiovisual performance. Our consulting practice areas specialize in all aspects of architectural acoustics, environmental and industrial noise and vibration control, and audiovisual systems design.