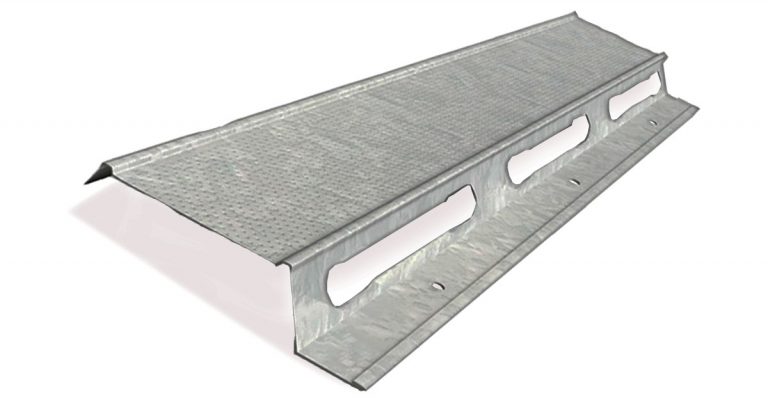 Resilient channel (RC) is a popular option in acoustic design and construction. While RC promises a huge positive effect on the acoustical performance of a wall, facade, or floor/ceiling, the reality can be disappointing, even failing to meet code.

What is Resilient Channel?

Resilient channel, also known as RC, is a metal framing material. While it was originally designed for crack suppression for drywall panels, it is now primarily used to change the acoustical properties of walls and ceilings. It has a characteristic zig-zag shape with two legs connected by a web and is usually 1/2″ deep. When building a wall, the RC is positioned perpendicular to the studs and the short leg is attached to the studs. The drywall is then screwed onto the long leg (rather than into the studs). 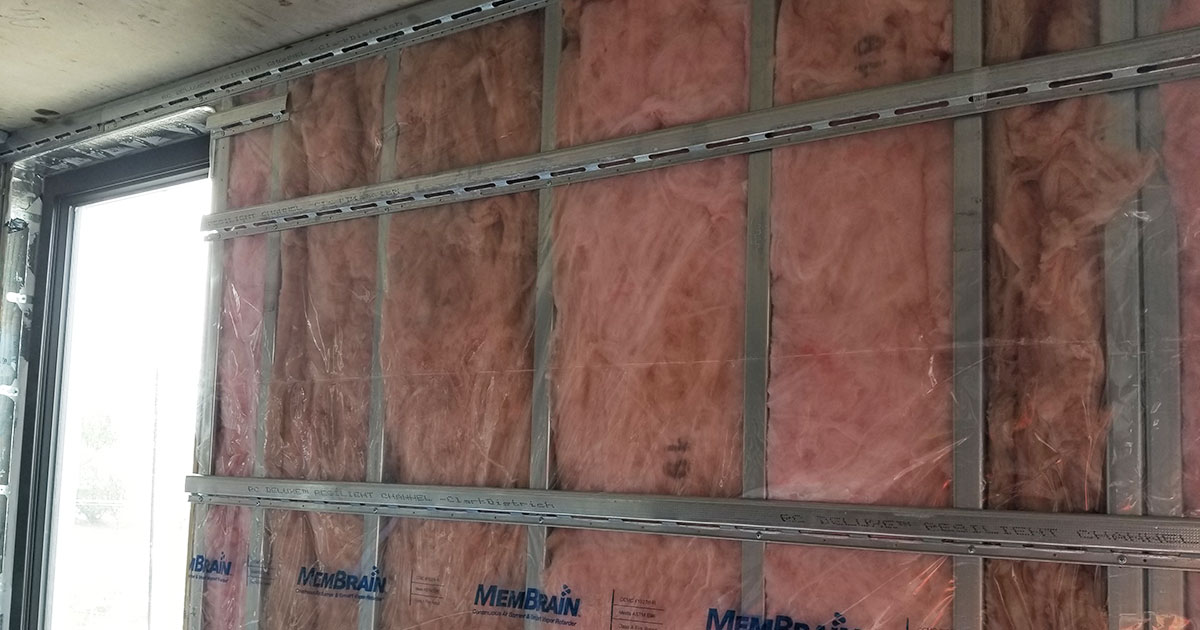 How does RC work?

By installing the drywall to the RC instead of the studs, the drywall is now “floating,” which decouples one side of the wall from the other. This decoupling makes it much harder for both airborne vibration (sound from your neighbors talking) and structure-borne vibration (such as a slamming cabinet or footfall impacts from upstairs) to make it through the structure. 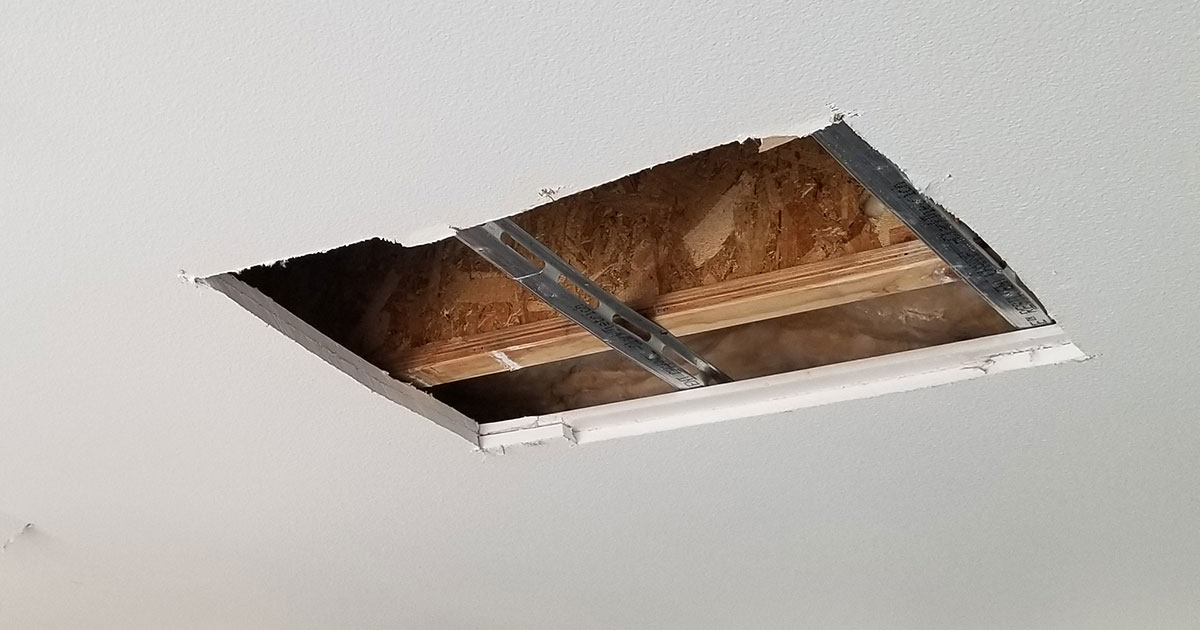 On paper, RC seems like a great product. Data from acoustical testing labs shows that by adding RC to a wall, it can improve the acoustical rating by 15 STC points. However, this rating is heavily dependent on many factors.

Any one of these can affect the rating.

In our experience, we’ve found that there are typically multiple issues with RC on a project. In the many dozens of projects that we’ve worked on where we have done site visits during construction, there has been at least one (and usually many) issues with the RC. We have never seen a perfect installation, even in cases where we communicate with the contractor before installation begins.

With acoustics in general, the devil is in the details. Small imperfections or changes can result in big problems with the acoustics. Particularly with RC, there are a lot of relevant details.

These common problems can be broken into two categories: design issues and installation issues.
More about RC installation.

A side note on acoustical ratings

The Sound Transmission Class (STC) rating is a standard acoustical rating system in the US. It measures how much sound is transmitted from one side of a wall to the other. An STC 0 rating is equivalent to an opening, while higher values mean better sound blocking.

For context, a typical interior wall in an average house has a rating of about STC 35. The International Building Code (IBC Section 1206) specifies walls and floors between apartment units and between units and public areas, have a minimum STC 50 rating. Condominiums and luxury apartments are generally designed for STC 60, while concert halls and recording studios will have walls in the STC 70-80 range.

A similar rating system is used for footfall impact noise on floors. The Impact Insulation Class (IIC) rating follows a similar scale, with code minimum of IIC 50 and condos generally designed for IIC 60.

The original resilient channel was created by USG and marketed as RC-1. Many older tests, especially large sets of tests in the UL design guides, used the RC-1 product. However, USG stopped manufacturing RC-1 in the 1990s. The design of the original RC-1 channel was sold to ClarkDietrich, which now sells it as RC Deluxe (model RCSD). To this day, most testing of assemblies with RC is done using the RC Deluxe channel.

ABD does not manufacture, sell, or install any products. So, you can be sure our findings and recommendations are based on data for your best interests, rather than sales. In this case, the laboratory test data available primarily uses this particular product.

Confusingly, many other companies have started selling resilient channel branded as RC-1 (even including ClarkDietrich). However, not all RC is created equal.

The Dietrich RC Deluxe features 3” wide dogbone-shaped slots every 4” along the web. This means that the amount of metal connecting the two legs is fairly small. Many other brands use much smaller holes in the web, which means there is more metal, which in turn makes it stiffer and thus less effective. 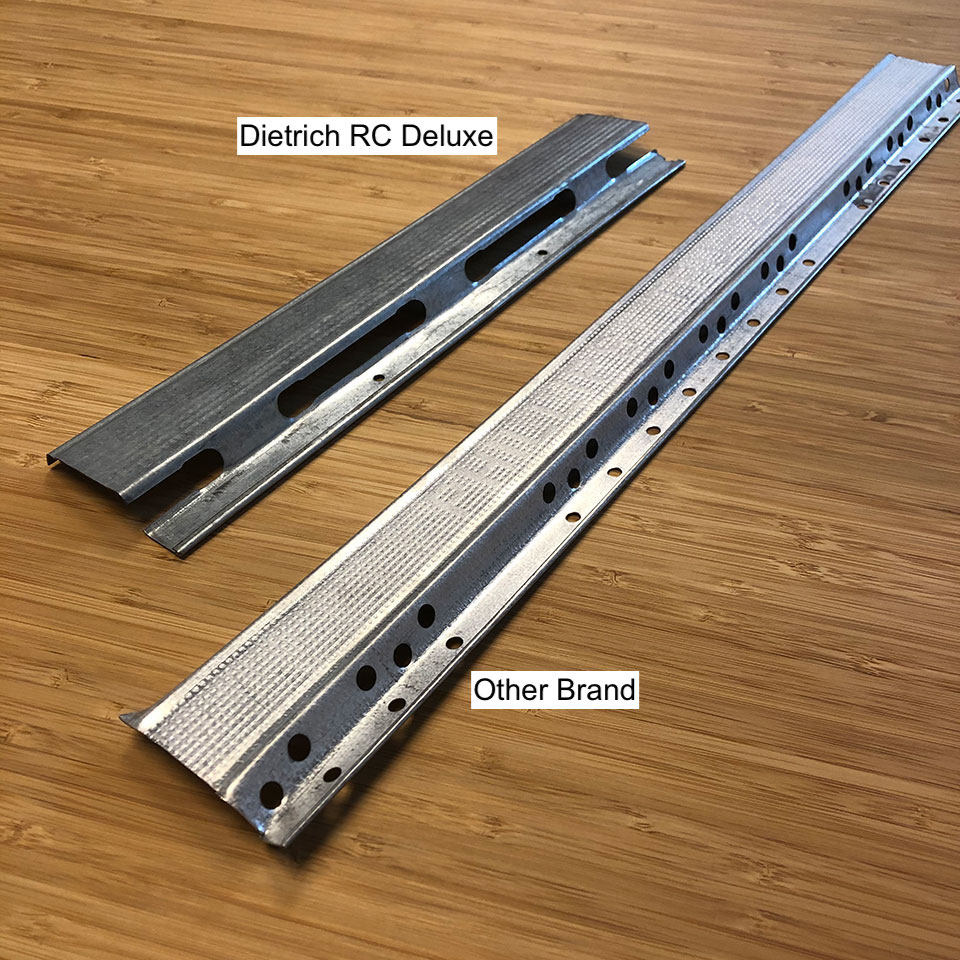 Several independent acoustical testing labs have done comparisons between the Dietrich RC Deluxe and many other brands and styles of resilient channel (different hole shapes and spacing, different metal stiffnesses, etc.). They have all found that the RC Deluxe performs better than almost every other brand that has been tested. The side-by-side testing has shown that other types of RC can perform anywhere from 1 to 8 STC and IIC points worse than RC Deluxe. If your assembly is designed for STC 52, using a different model of RC could potentially mean that your wall no longer meets code. Given how often RC Deluxe is used in testing, it’s almost guaranteed that the rating in your assemblies page is using RC Deluxe, and thus using any other brand or model of RC will result in a lower performance.

To compound the issue, RC Deluxe also happens to be one of the most expensive models of resilient channel, so almost without fail, it’s one of the first things that a contractor will ask to substitute with a cheaper (and lower-performing) model.

Some manufacturers (though not all) perform testing of their own RC. In some cases, this is fine – if it is brought up early in the design process, the design of the wall can be adjusted to meet the goals while using a different model of RC. However, there are some “gotchas” in the testing. As previously mentioned, the devil is in the details, so you need to be careful when reading the test reports, or have an acoustical consultant review the testing, to make sure you are actually getting a fair comparison.

The most common trick (or possibly, mistake) we see is that the manufacturer will test their RC on a light-gauge steel stud wall. This is a problem because a light gauge steel stud has enough flex to act like a resilient channel by itself. To see why this is a problem, imagine that you wanted to test how firm a pillow was. If you put the pillow on a table and press into it, you can get a good sense of how much give it has. Now put that pillow onto a waterbed. When you push down, there’s a lot of give, but how much is coming from the pillow and how much from the bed? The use of the light gauge studs in these tests is like the waterbed – it makes it seem like the pillow (RC) is a lot squishier than it actually is, giving lab results that are much higher than what you would actually see when you put it in your building on a wood or heavy-gauge (20 gauge or heavier) steel stud.

Resilient channel is not designed to support heavy loads. In general, two layers of drywall can be installed on RC, but not much more.

There are a number of items that will be attached to the walls after the drywall is installed. Some, like mirrors, can be screwed into the RC with no issue. Other items, such as cabinets, handrails, and ADA grab bars, need to be attached directly into the studs to support the weight. As you can imagine, screwing these into the studs will bypass or “short out” the resilient channel, and the acoustical ratings can drop dramatically.

This can be avoided in several ways:

Benjamin Wolf, INCE Bd. Cert. is a Senior Acoustical Consultant, in Portland, Oregon with a Master of Science in Architectural Acoustics from Rensselaer Polytechnic Institute. He specializes in analysis and recommendations for the spaces and structures needed to provide acoustically effective and comfortable environments. As part of his master’s thesis, he modeled accurate acoustical representations of several famous music performance venues allowing musicians to hear their performance simulated in those spaces, in real time, as if they were standing on stage. In his spare time, Ben plays bass trombone with a wide variety of local groups. He enjoys web design and recording live sound.